Learn the basic principles of stage combat and how to utilize them in partnered routines. We will cover essential safety elements; key moves such as falls, slaps, hair pulls, punches (and reacting to them); how to make a fight comic; basic level swordplay; and how to assemble fight "phrases" to tell a story. Please come prepared to move - and to have a bit of violent fun!
Movement

About the Teacher - Kim Carrell

Whether the scene calls for swords, wrestling, bare knuckle punches, or working with more esoteric implements such as hammer and trowel, Mr. Carrell works to keep things safe and truthful. From a simple slap to a rapier and dagger duel, it is of the utmost importance that the fights do their part in telling the story. Showing who the characters are, and why and how they fight has much greater impact than an “action for action’s sake” scene. Mr. Carrell has choreographed fights for professional companies and university theatre programs around the United States and in the UK, including: productions of all Shakespeare history plays, “Othello”, “Romeo and Juliet”, Troilus and Cressida”, “As You Like It”, “Macbeth”, “The Pirates of Penzance”, “Little Women”, “The Most Dangerous Game”, and world premiere productions such as “The Blowin’ of Baile Gall”, “Jasper Lake”, and “Training Wisteria”. 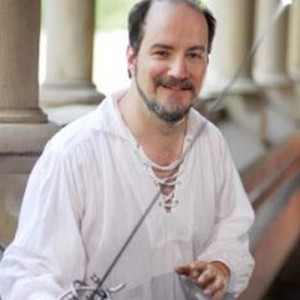