Part of a dynamic burlesque act is being able to create levels. Learn floor work techniques that will challenge your body, mind, and creative processes. Bring high heel shoes and form fitting clothing is recommended.
Movement

About the Teacher - Bella Blue

Born and raised in New Orleans, Bella Blue started dancing at the age of 3 studying extensively in ballet and modern into adulthood. In 2007 she traded in her pointe shoes for pasties and hasn’t looked back since! Her style can be best described as unpredictable! Bella can offer everything from classic fan dances and reverse stripteases to androgynous, neo, and controversial pieces. But no matter what, expect to be entertained! She has become one of the most recognized burlesque performers in New Orleans and across America. Bella performs predominantly in New Orleans but has also performed in Los Angeles, Dallas, Chicago, Las Vegas, North Carolina, Virginia, Minneapolis, and Switzerland. She is also a regular on the stages of New York, visiting every 3 months. In 2014, she headlined the Virginia Americana Burlesque and Sideshow Festival and the Caput Mundi Burlesque Award Festival in Rome, Italy. She also made her Burlesque Hall of Fame Weekend debut in June 2014 where she was invited to perform in the “Movers, Shakers, Innovators Showcase.” Bella’s pride and joy is The New Orleans School of Burlesque, where she has reigned as the headmistress since 2008 and hosts New Orleans’ only weekly running of burlesque classes. She has taught the art of the tease to hundreds of women from New Orleans and beyond and the number continues to grow. The New Orleans School of Burlesque is also host to a number of guest teachers from across the country and specialty workshops. She is deeply entrenched in preserving burlesque in New Orleans (which is rich in burlesque history) and can often be seen performing in other local productions and fundraisers making sure that as many people as possible get to experience just how incredible burlesque is. In addition to running the school, she is one of the leading show producers in New Orleans. She is the Artistic Director of “The Dirty Dime Peepshow,” “The NOSB Student Showcase,” and one half of Bellamour Productions. She also is the producer of “The Blue Book Cabaret” at Lucky Pierre’s which is held six nights a week and is the first time New Orleans as has consecutive nights of burlesque entertainment on Bourbon Street since the 1960′s. 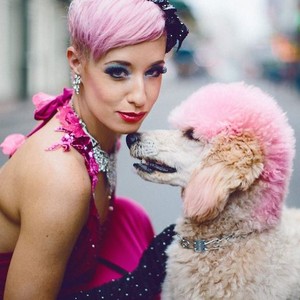