Get your body in motion with some smooth moves courtesy of some of one of the top burlesque performers in Chicago, Red Hot Annie! Focusing on developing technical proficiency with your four legged friend, this class is geared toward performers with various dance backgrounds who want to look like a professional using a chair! This hour long workshop is geared toward providing folks of all genders with the skills to perfect specific chair movement. Learn new moves to add pizazz to your repertoire! Using a combination of classic & modern burlesque music, Annie guides students through applying combos correctly and effectively.
Movement

About the Teacher - Red Hot Annie

rawing on over a decade of performance background, Red Hot Annie turned her attentions to burlesque in early 2008. Over 600 performances later, her award-winning blend of candid comedy, shameless sexuality, and character-driven storytelling has made her one of the most recognizable and visible faces in Chicago and throughout the world. Whether she's painting, sweeping a set of luxury feather fans through the air, or gleefully twirling a pair of tasseled pasties, Red Hot Annie is sure to make the wieners boil! In July 2008, Red Hot Annie paired up with Dick Dijon to form Vaudezilla (voted Best Burlesque by Chicago Reader 2011 & 2014), a production company that has become a major force in Chicago by setting a new standard for burlesque cabaret shows. Annie opened Vaudezilla Studios in 2009, and she and her crew of top-notch teachers have established the studio as the premiere destination for Chicago burlesque and performance instruction. She also has been and remains one of the Executive Producers of the Windy City Burlesque Fest since its inception in 2010. A constant presence in Chicago burlesque, she has also traveled extensively throughout the United States and abroad, with regular appearances in France and the United Kingdom. Red Hot Annie has headlined many national festivals, and has been nationally recognized with being voted #34 in the Burlesque Top 50 for 2010 and winning "Best Novelty" at Texas Burlesque Fest in 2012. 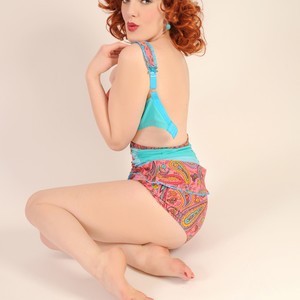